How Do You Know Samsung?

Samsung’s journey goes from the point of  “eh, not bad. They’ve good phones for 100-200$ range, in fact Samsung is a big business they have cranes and all…”  to world’s biggest IT industry leader.

They did something better so they have come to this far, but will it be enough to keep them on peak? or will they fall like former big businesses?

Domestic appliances, automotive, heavy industry etc. aren’t in my branch and I don’t want to go off-topic so much. I will mainly focus on consumers electronics and one of it’s most profitable/popular type: ‘Smart Devices’.

Samsung is a widely known firm now. There’s an easily observable fact on developed countries about smart phones that you’ll most likely to find an iPhone or a Samsung in everyone’s pocket. Market values are also supporting this fact. Although they don’t place themselves as a pop-cult component like Apple did, Samsung opposes Apple. Samsung was recently convicted of copying Apple by the American Court and had to pay nearly 1 billion$ of issued fine. But I’ll question that, is it really the case? Did Samsung progressed solely by copying?

As you all know, these great words belongs to Picasso but it’s also Steve Jobs’ life–time motto. Yes, it’s safe to say that Samsung copied iPhone, according the American Court, but there is an argue going on about whether it’s fair to call what Samsung did was stealing or calling it as being inspired is just enough?

Samsung and all others, in this patent disaster, should admit that they took Apple products as example or just inspired in their works, but I think what matters the most is that ‘Did Samsung caused this situation or Samsung had to work with Android and that was the reason behind it’?

In Samsung-Apple situation, it’s a little obscure who stole from who while there is an obvious “Google Touch” which I think so-called ‘Linux core’, and ‘Linux lover’ company.

iPhone’s success was unavoidable against market leader Nokia crushed with Symbian failure, a devastation caused by ‘the best mobile engineers  had to work with the worst marketing experts’, with a marketing genius like Steve Jobs himself.

With marketing, world’s greatest consumer experience (relatively) with a nice piece of software and user experience, iPhone managed to get a well-deserved market share. They sold first touch screen and first application store enabled smart phones, if you believe!

But market was big and expanding, if you ask me, mobile market also can double itself today. In this case, the market could not include just Apple. There exist still second and third places that can be won by Blackberry, Nokia or Motorola but they didn’t seem to deserve that places.

Mobile user’s expectations are quite odd compared to other markets and it keeps evolving (oddly stucked ‘mobile application quantity’ but it will change in time, I hope). This evolution was expected to happen on two front; software and hardware. Because the users have migrated from PC to mobile, they used to be ready for this kind of evolution. But when Apple sold its software with its own hardware and managed to be the best in this field, market preferences didn’t have a choice but evolve that way; integrating your own software to your own hardware. Opposite situations led to failure like Windows and Windows Mobile…

Google is taking steps for becoming the world’s software giant with confidence. There is no need to back this fact up with numbers because everything is Google now. Google has lots of ‘information’ in the sector, if it’s called ‘Information Technologies’ and besides that they have the best software algorithms and software engineers and of course ‘Andy-roid’ manager.

Google who must have seen the world going mobile more than anyone, appeared with Android platform. Google created an enormous ecosystem with relatively open source spirit and a make-believe Linux friendly image. There is no need to count the cons of Android, in fact there is no need to count Android’s pros also, because there already exist similar statistics explicative enough, nearly %70 of all the smart phones use Android currently. End of discussion.

We should be surprised about Android’s success because in this giant market, if you use Google as your name and if you have developers yearning to enter the market and if you fake the ‘open resource spirit’ while keeping an eye on developers, you will be successful even with a horrible system. Some aristocrats, elite technology gatherings and the ones decided to stay out of this type of road like Intel, Nokia and Blackberry have been sidelined unfortunately.

‘Android is “so good” that its world’s most commonly used platform!’ did it now I’ve only one question; you have a 800$ worth iPhone in your one hand and a 300$ worth device with Android in other having the same and even more functions (relatively) as iPhone, which one would you pick?

If you don’t have 5000$ of revenue or if you understand that this object has been just a pop-cult meta and if you live in a country in which a waiter/waitress has to sacrifice it’s 3-month-worth lunch and transportation money if he/she wants to have an iPhone, you wouldn’t buy it!

Naturally people are picking the equally efficient (relatively) and disjunctive 300$ option except a few people with low income want to make an appearance. 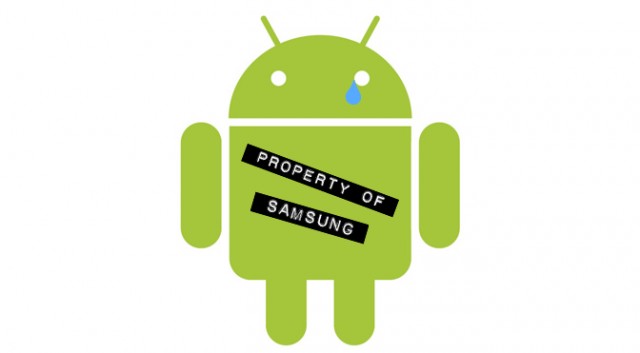 This is where Samsung steps in. Samsung sold formidably by installing Android to its devices and focusing on hardware while using its industrial experience in that field with the help of awareness which created by it’s huge network on the current global market. Samsung sold brilliantly of course, what was it’s alternative? HTC? For how long the new generation users do knows the HTC’s name? HTC or LG’s (having better design) products and software firm, if you ask me. But Samsung kept the attention and produced devices with powerful hardware which gave them users favor. People with knowledge about content, don’t care how much clock speed it’s processors have (until Android 4.2), but Samsung observed end-user’s expectation. They also saw the needs of bigger screens and deployed it successfully and deserved achievement.

There was a time when Android’s awareness was less known than Samsung and it sold its devices with its firm name and hardware regardless of which operating system they use and they proved it with ‘bada’. Similar market share with Windows Phone last year.

But Samsung’s all side success’ dynamo, it’s most widely known and most profitable series ‘Galaxy’, wasn’t there. Yes, Galaxy hardware is owned by Samsung but software is completely backed by Google which puts Samsung on Google’s lap.

This disturbs Samsung, in fact makes Google uneasy too. Samsung dominated the Android market with 40% and Andy Rubin (head of Android) started to speak their disturbance publicly.

Well, this town isn’t big enough for both of them and of course the one who’s sitting on the lap should go.

Samsung’s fatal end is coming and they’re aware of that and they’ve started to invest on the thing that will make them get up from Google’s lap. This is why ‘Tizen’ was created and be an alternative for Samsung. Samsung starts playing his cards on Intel and Linux Foundation in order to gain support of open source world just like Google did and become a primary stack-holder.

Samsung Tizen’s long term strategy is simple; stop using Android, but HOW? Samsung have a giant ecosystem; fridges, smart TV’s, washing machines, netbooks, cars… How would it be if they have their own operating system to use in these devices? It would be wonderful. For this reason, the cross-platform Samsung Tizen is an alternative for Samsung and a good choice if you believe that mobile’s future is on web.

Samsung and Intel aren’t the only ones believing that the future is on the web. Mozilla’s Firefox OS is also a proof of that. Very serious partners announced that they will pull for Firefox OS like; Sony, Huawei, Telefonica, ZTE… I am personally surprised to see Sony on this field. It’s a curious thing that they have chosen to oppose Samsung rather than teaming up with them through these hard times. For as much as Sony doesn’t stand a chance against Samsung. They’re just deluding.

Firefox OS is an interesting enterprise in fact, when Mozilla Foundation announced OS nearly the same time as Tizen. They are both HTML5 based and they both have similar mission. As far as  we know, Firefox OS targeting feature phones and Tizen for high-end. When I went San Francisco for Tizen Developer Conference last year, I heard a shocking rumor from some of my friends. Firefox OS is also Google’s exit B plan for Android and they are one of the biggest supporters of Mozilla on this project. An idea that Google preparing Firefox OS in order to consider quitting Android in long term which is also just a rumor but also it seems like a good conspiracy theory.

Mobile world going towards HTML5 fastly. All operating systems offering more HTML5 support with every new version. There is two major reasons for that; one is finishing off the Adobe Flash Player which Steve Jobs led and hoped Java is next. If Steve Jobs had a few more years, I am sure we would be progressing on this field. Because he would do everything to finish Android which means finishing Java too in a mobile area.

Today, Java is considered as fundamental in computer education and commonly used all around the world. But how could we get rid of this unsafe, bad interfaced, low performance language? If we want to fight against Java, there is two situation. Find a cross-platform language with database function. Interestingly, one of the major function of HTML5 is local database, it is not strong as Java but sufficient for today’s mobile applications. Besides you can create better interfaces and there’s a little bonus, javascript and CSS.

Java will die out eventually with the world going mobile. It seems that HTML5 will replace it. Big investors seems to think like me rather than the ones saying “web is over”.

If Java shows the signs of extinction, last nail to it’s coffin will be by Google, giving Android to Firefox or Chrome OS and it takes Android with it.

Of course when I say Java will be over, I am talking about mobile.

All this trends shedding a light to see the future of mobile, a world in mobile operating system battles takes place in. Of course ones with better sight of future and better investments will prevail and the ones keeping the peak for themselves. Apple lost it’s prevalence on the field with Steve Jobs’s death. They used to lead the sector but now what they’re selling are 7” tablets, besides after everyone. They’re able to sell it good because of it’s being an “Apple” product. If people start to look for another leader in this field, we will be witnessing Apple’s “after Jobs” era.

Will Samsung be able to fill this space, will they be able to lead the mobile sector?

We will see if Samsung’s new tech kitchens in America and Europe be able to bake the product to take the lead. They are going to right direction. They imported firm on hardware but they have a question mark on software. They can achieve a great deal on software by hiring European and American open source software engineers and managers. They have good coders and capable managers; but talented drafters, intellectual managers and wolves of the market are in America and Europe. Samsung will gain success with promoting the number of its American and European managers. They could think Tizen for fixing their software problem today or another thing tomorrow, but they will have to do it eventually if they want to keep their places.

3 thoughts on “Samsung, Tizen and the Future of Android”